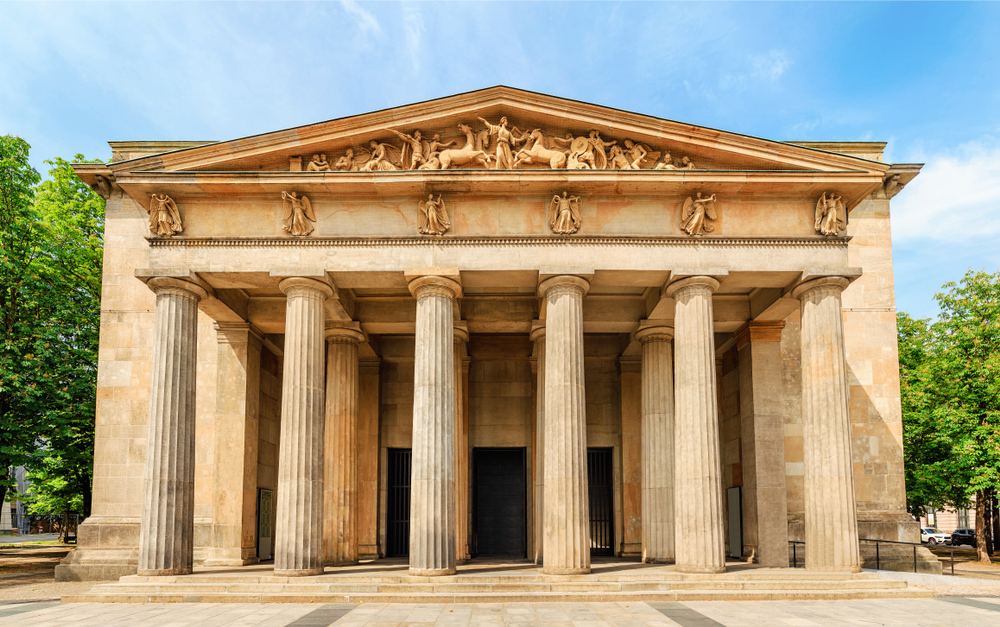 Which Greek Revival architect was most Greek: the Dane, the German, the Scotsman?  The German, Karl Friedrich Schinkel (1781—1841), designed a royal palace on the Athenian Acropolis for Prince Otto of Wittelsbach, King-elect of Greece.  The Scotsman, Alexander “Greek” Thomson (1817—1875) was so Greek that “Greek” was his middle name.  The Dane, Baron Theophil Edvard von Hansen (1813—1891), was honored with commissions for Greece’s most important buildings, post-antiquity, “The Athenian Trilogy”: The National Library of Greece, the University of Athens, and the Academy of Athens.  How to choose between the three?

First, probably best to admit that style in architecture (id est, the “Greek Revival”) is not historical.  Style in architecture is not compassed by time.  Architectural style does not evolve, alike a finch’s beak, or the saddleback shell of a Galapagos tortoise.  No, there is in architectural style neither that gradual development toward increasing complexity which encourages a survival of the fittest, nor is there that Zeitgeist (Spirit of the Time) convenient to droning Marxist professors and Woke commercials. 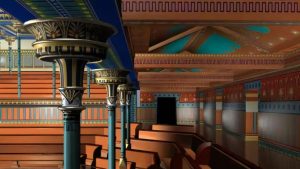 Architectural style is an idea made real, a family seed now and again fertilized, here and there conceived in love or ambition, brought to birth by accident, chance or plan in a building, a built body that shares family characteristics.  “Style”, you might say, is the feature of face, the quality of carriage, the quirk of personality, the familial habits passed generation into generation.  Buildings are born of man, you know, as man is borne of God.  Man and buildings (houses, temples, mangers) are things of design spoken into life by idea.*  Man, an architect, will in style grow a building to life, generation into generation.  Architectural style, let us say, “The Greek”, will be renewed, “Revived” you might say, will show itself over time and space a member of a family, as does DNA show itself in you, in me, we particular persons of particular families in the family of Man.

You will notice: there is no singular “Greek” architecture.  The temple itself, most Greek of the Greek, might be Doric, Ionic, or Corinthian, even Tuscan, that Etruscan of the Greek family, even Aeolian, the pre-Greek of the Levant that this architect speaks forth into American monuments and memorials.  Yes, a style name is a family name, a nomen, a Smith or Jonas.  The most Greek of Greek architects during the 19th Century of Christ’s ministry might have the cognomen of a Dane, a German, a Scotsman, yet all are Greek in tradition of mind.  Let us decide which of these three, Schinkel, Thompson, von Hansen, is most Greek of the Greek Revival, the Greek renewal of recent centuries. 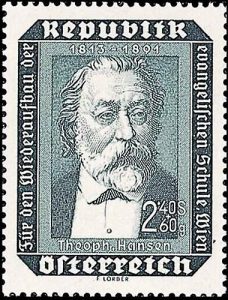 Well then, the Dane, Baron von Hansen: a student of Schinkel who created a national architecture for the emerging Greek state, rational, linear, symmetrical, a style much unlike the antique Greek which was logical, volumetric, asymmetrical, hos epi to polu.  Baron von Hansen was a modern architect who framed his buildings as though composed for a picture of the Quattrocento variety, and this is why his buildings want to be witnessed sans people, though when peopled, arranged as might Raphael pose persons into some ideal of a civic scene.  Each rational measurement, each stroke of the Baron’s finely pointed pen and exacting brush translates into buildings suited to noble humanity, as was that heroin junky framed in the porch of the university enlarged by becoming a symbol of the forgetfulness of the progressive world. 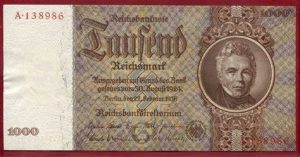 Schinkel, friend and student of Gilly, was a Prussian who formed the idea of Germany, an artist of fine sensibilities grand in scale, sublime in conception.  You will notice that critics of the Greek are stymied, silenced before Schinkel whose expression of soul outsouled anything the Progressive has created.  Alike Baron von Hansen, you might say of Schinkel that his buildings are clean, ultra modern in the positive, enlightened and humane sense, a modernism differing from the brutal, scientific modernism that delivered the atomic bomb and urban renewal.  Schinkel realized a Greekness more soul than fear, more human than god, more personality than propaganda, a Greekness fitted to the well-appointed gentleman and lady, to the connoisseur who would appreciate his buildings suitably framed, spaced at distance so that each might be a unique aesthetic experience, alike pictures politely spaced on museum walls. 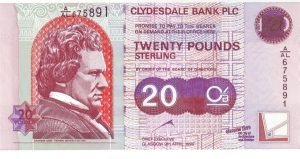 The Scotsman, Alexander “Greek” Thomson, was an original, a muscular artist who by discipline civilized his genius to create works of architecture that are the equal of Michelangelo’s statuary.  Alike Baron von Hansen who created an idea of the Greek for the Athenians, alike Schinkel who made of Berlin a new Athens and made of Germany the new Greece, Thompson made of Glasgow a modern Athenian colony, inheritor of the best that has been thought, said, done, and this in a gritty industrial town, hungry, tough, elbow-tight.   And you will notice this: Thomson’s Greekness is most often asymmetrical, unsympathetic to Roman, Palladian hierarchies and formal sensibilities.  Thomson, though modern in the Hippodamian necessity, conceived a civic fabric democratic in the friendship of forms. 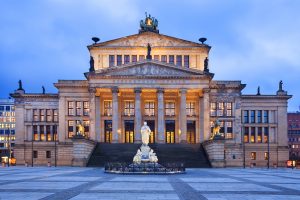 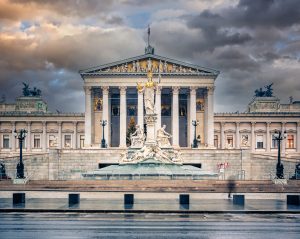 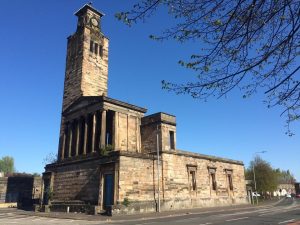 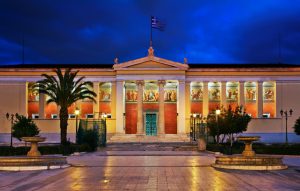 The Old University of Athens, known as Propylaia, among the three buildings of “The Athenian Trilogy” designed by Baron Theophil von Hansen, image credit: Herakles Kritikos

THE MOST Greek of Greek Revival Architects, FINAL SCORE

And there it is: the most Greek of the Greek Revival is a tie between Schinkel and Thomson.  How to decide.  Thomson designed for the democratic commercial interest; Schinkel designed for the elite aristocratic interest; both the democratic and the aristocratic have their beauties, their virtues and vices.  Then, as you will find, democrats tend to an inflexibility of aristocratic opinion, while aristocrats tend to democratic gentility of opinion.  Might the building types tell: Thomson designed churches, villas, tenements and commercial stores; Schinkel designed palaces, castles, museums and civic buildings.  One wonders what might have happened if the architects had switched clients; very little, I expect.  The clients of the one would have been unhappy with the buildings of the other.  Democrats and aristocrats are different people, whether in Berlin, Glasgow, Athens, always have been and always shall be.  So then, if democratic, Thomson will be your man, first of the Greek Renewal.  If aristocratic, Schinkel will be your man, a Greek Revival architect unparalleled in artistry.

What might have happened if Leo Von Klenze was substituted for Baron von Hansen … well, it would not happen, though Klenze has much to recommend him, the Baron is superior in the Greekness of his Greekness.  Here I am not being clever, just truthful. 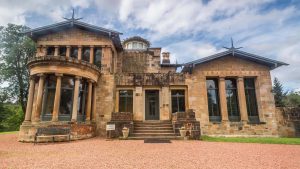 * “Spoke” into being?  Yes.  Each architectural style is articulate, a visual language reasoned into existence, written in symbolic characters along lines that describe, alike sentences in a book, an idea strong enough to live beyond the architect.  As Homer spoke Achilles into existence, into statues, into the model for Alexander the Great, into Brad Pitt, et alia, our American architects, Benjamin Henry Latrobe (1764—1820), William Strickland (1788—1854), and Robert Mills (1781—1855) spoke into existence the idea of the American Bank building, the American Democratic Government building, the American Monument.  We might say: “By Greek architectural language every American lives civically through the Parthenon.”  The Parthenon, Temple to Athena Parthenos, “Athena the Virgin”, is the model of American banks, government buildings, and memorials. 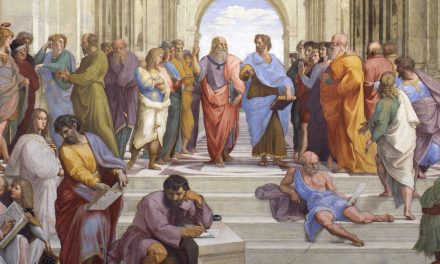