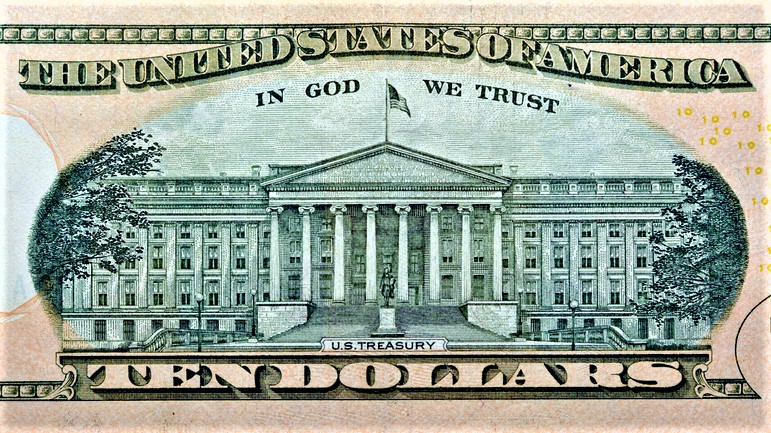 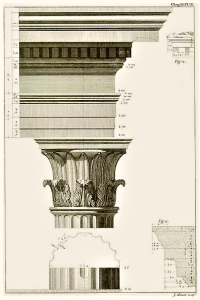 Temple of the Winds detail, from The Antiquities of Athens.

You might say, “Classical Greece concluded in the strike of an asp to Cleopatra’s breast.”  Cleopatra VII was, as you recall, Macedonian, ascendent of Ptolemy, Macedonian general, first Greek pharaoh of Egypt, friend and likely half-brother of Alexander the Great.  From that time, 30 A.D., Rome superseded the Greek in all things artistic and civil.

To the uninitiated, the Greek and the Roman often seem one and the same, yet when dilating for more than a wink, you will notice that the toga differs from the chiton, that Venus differs from Aphrodite, that Romans spoke Latin while Greeks spoke Greek (well, in truth, more Imperial Romans spoke Greek than Latin), and that Roman architecture is in little particular, Greek.  This one example, below, will demonstrate.

Look to the molding base of your room where likely you will notice the simple geometry of a quarter-round.  That quarter-round is Roman, the simple cutting of a cylinder into quarters, alike a circle quartered, a simple geometry.  The Greeks employed a complex, parabolic geometry, more ostrich-egg than tennis-ball.  Now, take a Roman-formed ball in the hands of your mind’s eye, let us say “the Platonic form of tennis-ball” and squeeze the ball and stretch the ball dynamically as the Greeks would do (notice the push and pull of negative, positive), dividing that form into quarters and you will perceive the expanded potentiality in design.  Yes, the Roman tends to the static, the Greek to the dynamic, subtly.

Well then, for a millennia-plus the Roman prevailed, the Greek receded, the Ottoman conquered, the Christian forgot, and then the Roman was renewed through Italy into Europe by artists mature in faith who recalled their heritage and rebuilt our ancient glory: witness Saint Peter’s Basilica, Rome (1506—1626 A.D.), and other buildings of the Renaissance, the “rebirth”, the renewal of humane tradition. 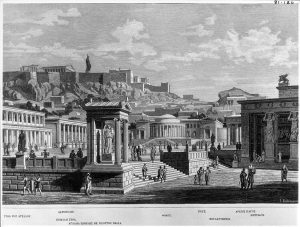 For several centuries, scholars of the Eastern Rome Empire were exchanging texts and deepening knowledge of the good, the beautiful, the true; we artists and architects were digging up statues and measuring ancient buildings, and as we measured and considered, Islam expanded, pushing us westward toward the Atlantic away from the Ottoman-controlled eastern Mediterranean (the Adriatic, Aegean, Ionian, Libyan, and Levantine seas).  For an accurate perspective on the chronology of the period, probably best to remember: In 1453, the Roman Empire ceased to be; in 1492, Columbus sailed the ocean blue.

And this bit of chronology: When Andrea Palladio published his rational restatement of Roman architecture, The Four Books of Architecture, 1570 (showing his villas designed for wealthy Venetians who were retiring before the force of expanding Islam), Ottoman Turks were occupying Cyprus, birthplace of Kyprian Aphrodite, subduing the Greek and growing Islam throughout the area once controlled by Athens, Alexander the Great, the Macedonian generals, the pharaohs, the Caesars, and the Constantinian emperors. 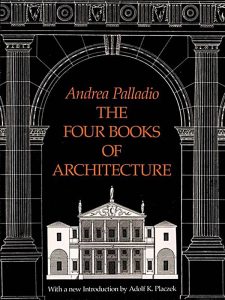 In 1663, the “Four Books” were published in England, and from England the Palladian Roman came to our Williamsburg, the colonial capital of Virginia, 1699.  We were at that time a colony of England, as England had been a colony of Rome, and alike Rome, alike England, our American hierarchies were patrician, imperial.

Well, little need to continue the chronology; you know as well as I the influence of the Enlightenment, “reason by which God might be known”, our War of Independence from Britain, the throwing-off of aristocracy, monarchy, the papacy, the Roman style and all the rest of the highfalutin what’s-its-nots.  We were, “democrats!”  First democrats since the Greeks.  Never mind that ours was a republic of Roman form, à la Cicero.  Too, being freethinkers, as then we were, we everywhere cheered those sufficiently brave to join us in liberty, the French, for instance, until the French began lopping off neighbors’ heads and murdering nuns. 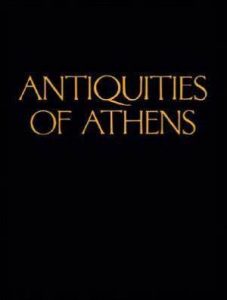 The Antiquities of Athens Measured and Delineated by James Stuart FRS and FSA and Nicholas Revett, Painters and Architects.

Now Greece, I mean to say: The Greeks were fellow democrats, Christian martyrs suffering under the Turkish yoke … all-we-all Americans raised the Greek standard, became brothers in Independence, became Greek in sympathy, civically and artistically.  Trouble was, Greece was, hos epi to polu, closed to us by the Ottoman Turk overlords.  And this is where we get to the theme of our essay, “The Greek Revival Pattern Book”.

The first book to repattern us from Roman to Greek was The Antiquities of Athens: Measured and Delineated by James Stuart FRS and FSA and Nicholas Revett, Painters and Architects, 1762, a collection of finely engraved plates accurate in detail, suggestive of potentialities.  “Antiques of Athens” was the first reference book to detail classical architecture of the Greek Golden Age.  The book was a revelation to a Classive world that had for over a millennia forgotten the beauty of Greece.  Before long, the renewal of Greek beauty would refocus aesthetic attention toward pre-Roman-Catholic, dynamic geometry. 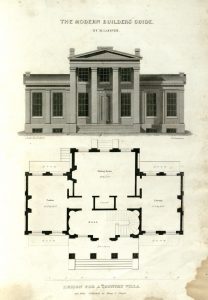 Design for a Country Villa, from M. Lefever’s The Modern Builder’s Guide.

We Americans, distrustful of Roman papacy and hostile toward English monarchy, rejected the Georgian (named for the Hanoverian kings George) and the Federal style, that polite, understated little brother of the Georgian.  Then too, the Greek War of Independence inspired Americans to embrace our political cousins fighting for independence from the Ottoman Empire (resistance began in 1798, the formal war occurred 1821—1832).  We too warred with the Ottomans who had kidnapped and enslaved Americans (1801—1815).  Increasingly, we Americans showed our alliance to Greeks politically and artistically.  The American Builder’s Companion, 1806, by Asher Benjamin with Daniel Raynerd, demonstrated the superiority of Greek over Roman patterns of architecture.  The Beauties of Modern Architecture, 1835, by Minard Lafever, allowed developer/builders easy patterns of reproducing Greek architectural elements, houses, banks, churches, and state capitals.

Other pattern books important to Classive architectural maturity of the 19th Century include John Haviland’s Improved and Enlarged Edition of Biddle’s Young Carpenter’s Assistant: Being a Complete System of Architecture for Carpenters, Joiners, and Workmen in General, Adapted to the Style of Building in The United States, 1818.  John Hall’s The Cabinet Makers’ Assistant, 1840; this link will take you to John Hall and the Grecian Style in America with an illustrated essay by Thomas Gordon Smith, a contemporary Classive working in the Greek renewal. 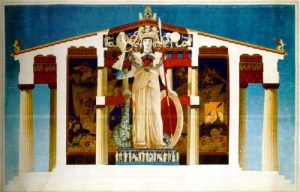 Many of us consider the body of American architecture to be waves of Greek renewal, Founding to this day, yet that is an account posterior to our gloss on the Greek Revival Pattern Book.  Even so, those who would like to witness Classive architecture of the Greek Golden Age will want a copy of Paris, Rome, Athens: Ecole nationale supérieure des beaux-arts.  Yes, the book is in French, and yet you will love the book for the rich watercolor plates by École artists who picture for the first time the unparalleled beauty of Greek houses, monuments, temples, and cities in entire.  After-all, as we all know, few bother with the droning, pedantic Marxist texts: in the first instance we acquire art picture books not for the opinions of art historians, but to drink-in beauty, to caress and to possess Beauty at fingertip whenever we please to touch the Good.

For antiquarians, The Complete Collection of Antiquities from the Cabinet of Sir William Hamilton where for many rinty tinty you will acquire a collection of Greek-like artifacts worthy of a university museum.  For a detailed account of our 19th Century Greekness, you will like Talbot Hamlin’s affordable Greek Revival Architecture in America, illustration-rich and descriptive. 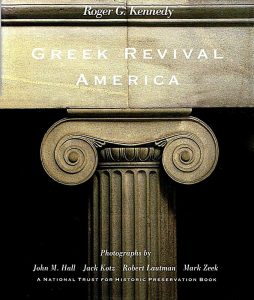 Classical architecture was deployed to proclaim American pride.  The Greek Revival was not an expression of the founding fathers; … The American Greek Revival arose as many Americans sensed the nation to be adrift after its heroic revolutionary accomplishments, feared its centrifugal disorder … While their partisan battles became increasingly savage, and were settled through the choice of classical forms, that partisanship did not prevent participation by the people of all parties in a general classical revival… 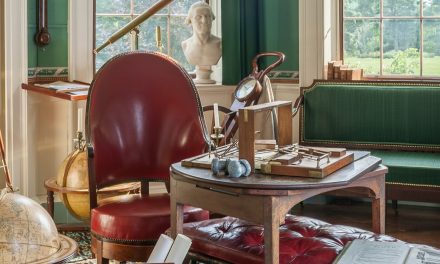 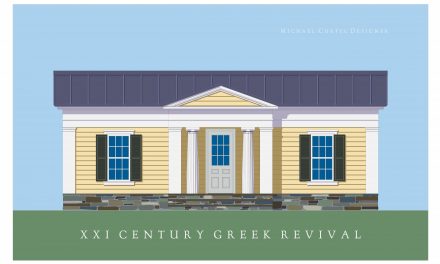 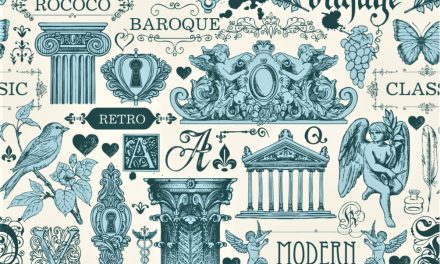 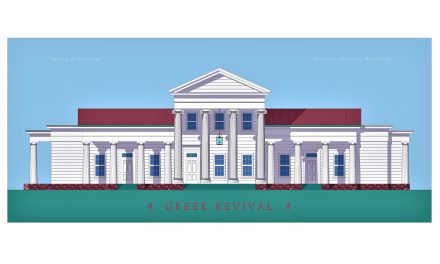