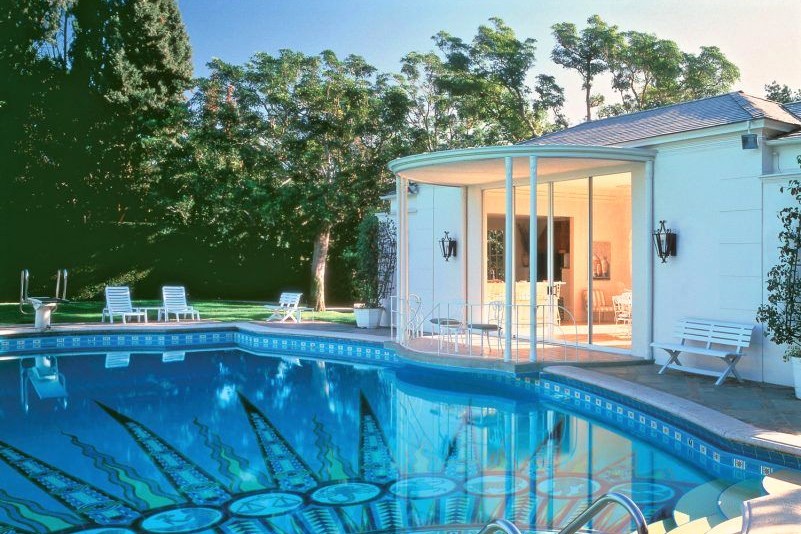 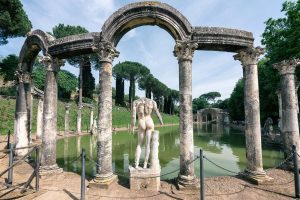 We might begin at the pool of Nero’s Golden House, at Darius’ Persepolis reflecting pool, at the canopas of Hadrian’s villa, as who would not, though probably best to begin in Beverly Hills at the Frank Ross residence, a Hollywood Regency pool house constructed during the year of this author’s birth, 1956.  There is a lovely potentiality in Hollywood Regency architecture, a latitude of stylistic influence, a stretching of style to bounds that touch toes in the water of bad taste, an excess of invention, of libertinism exceeding liberty, as with the Great King Darius, as with the Caesars and other Emperors of the World. 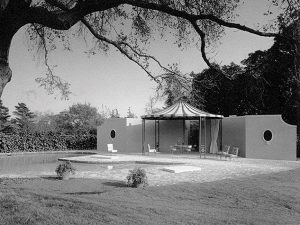 John Elgin Woolf’s Ross pool house boasts that perfection of beauty, imperfection, a singularity which punctuates unity of balance.  Not unlike J.R. Pope’s National Gallery of Art (1941), the classical details are spare, “stripped”, you might say, allowing scale and wall to provide pleasure, ease of comprehension.  The elliptical windows (alike eyes of a hammerhead shark) invert their keystones; the oriental porch tiptoes on decorative, supporting ironwork; the flanks of cornice suggest the elegance of a mansard roof; the drama of a curtain suggests the opening of a play, the beginning of an act; the center is a baying feminine, and nothing more. 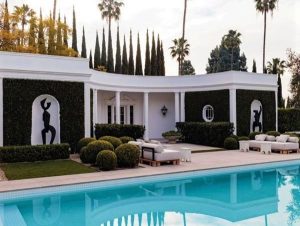 Unlike his Ross pool house, John Elgin Woolf’s Marrakesh pool house does not justify consideration.  James Dolena’s pool house for William Powell is a study in the Georgian theatre of Hollywood Regency, chic and hip and chique.  Again, a stripped classical that retains the essential elements, pilasters, entablature, columns in antis, broken swan neck pedimented door, porch and niches as-thin-as a skene from the theatre of Dionysus, or the moderne plywood walls of a Fred Astaire dance set.  Just now, the pool is curated by an excellent designer who enlivens the walls in living green. 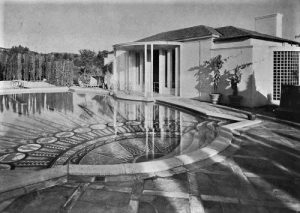 Paul Revere Washington’s pool house at the Paley Residence is Georgian Moderne, almost Scandinavian, something of an Eliel Sarrinen for America’s western coast.  The pool house pavilion summits a lavish pool whose bed is a Zodiac sunburst of many thousand richly colored tiles.  Flanking the pavilion, sandy geometric beaches for sunbathing; the whole ensemble, pavilion and pool and beaches includes a bar, a grill, a cards room.  The pavilion is deceptively simple: a central block with flanking dependencies, thin sheet pilasters, elegantly lean piers and a pencil-work iron fence beneath a measured canopy.  And that, the front.  The rear elevation is Schinkel distilled to essentials.  Nearby, the Mott Studio reflecting pool, a model of restraint. 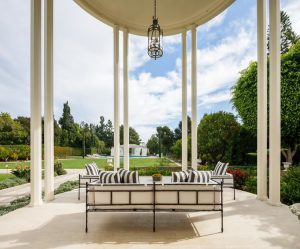 There are pool houses for each type of house:

The dipping pool or plunge pool, of which this author has designed several, are social pools for cocktails and company, rich in flora and artfully lit.  The healing saltwater pool is itself a dipping pool, of sorts.  And the spool, the spa-pool, is a hybrid much in fashion because of its size and low cost. 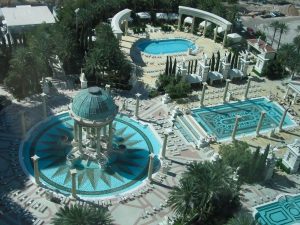 And then, of the seven pools at Caesar’s Palace, Las Vegas, the author’s favorite, the Temple Pool, a circular pool centered with a high domed temple suited to an Olympian Goddess, or to a goddess of the Las Vegas stage, as I have seen … wow.  This too in the spirit of Hollywood Regency, of make-believe, of theatre and fantasy, of all that dreams are made of, when wishing on a star. 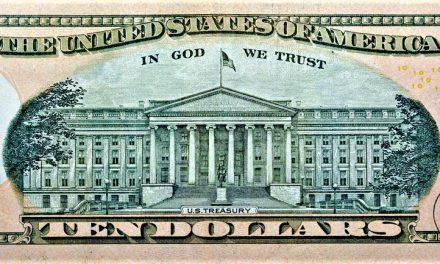