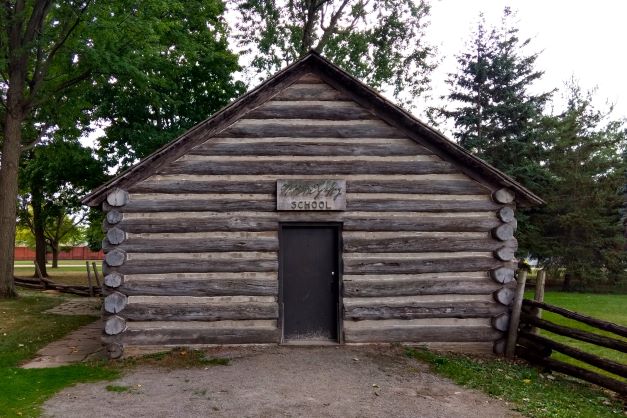 Content hide
1 Reading McGuffey and McGuffey Readers
2 “A is for AX”
3 “Nothing so likely to make a man’s fortune as virtue.”

Two years before our nation’s declaration of independence (1774), the Scots-Irish McGuffeys made the crossing, arriving in Philadelphia when Benj. Franklin was in London petitioning our king … you know the cause.  Soon, William and Ann’s son, Alexander McGuffey (excellent marksman and provider) met his Anna, and these two were married on the eve of Christmas, 1797.  Their first son, William (whom you know), was born in a quaint log cabin (1800) at the dawn of the American century that he would shape and form.

Typical of the westward Scots-Irish, Alexander, adventurous and self-reliant, Anna, pious and intelligent, resettled from Pennsylvania to 160 acres in Ohio’s Western Reserve (soon after victory in the Indian Wars), and there raised to excellence eight children.  As you can imagine, the McGuffey log cabin was tight, cozy and loving, and it was here in the Presbyterian way that young William Holmes McGuffey by fortitude grew into the faith that made him strong. 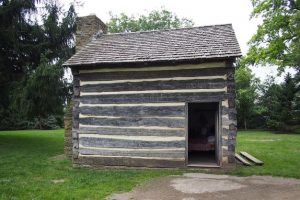 Two details worthy of mention: William’s mother Anna taught the McGuffey children numbers and letters by drawing out each character in the soot of the stone-end fireplace; several wise and generous ministers introduced the McGuffeys to world history through ethical precepts of the canonic Bible.  Of course, you recall the summoning declaration of our Northwest Ordinance (the document establishing the Ohio Territory, et alibi) that inspired our nation to the teaching of virtue, “Religion, morality, and knowledge, being necessary to good government and the happiness of mankind, schools and the means of education shall forever be encouraged.”

Anna, eager to augment her teaching of reading, writing, and arithmetic, directed young William to the Reverend Wick (six miles distant), an excellent man who schooled the boy in classical virtue and ancient knowledge.  William, inclined to learning, made rapid progress, opening his own school in September of 1814, when merely 14-years-old … then, as now, good private schools are in demand.  William McGuffey’s school hosted 48 students, each of whom brought to class their own Bibles and other books. 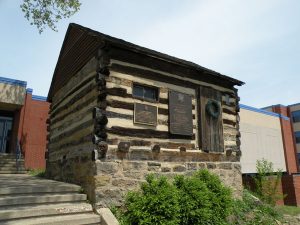 The following half-dozen years, William Holmes McGuffey balanced working the family farm and teaching at his private school with attending classes in the three log-house schoolrooms of Washington College (later, Washington & Jefferson College).  In 1820, McGuffey continued his formal education at Oxford, Ohio’s Miami University, where in 1826 he was elected Professor of ancient languages (Latin, Greek, Hebrew).  McGuffey was ordained by the Presbytery of Oxford in October of 1830.

In ministry, McGuffey would preach & teach, delivering without notes over 3,000 sermons to students, faculty, friends and other faithful through his tenure as president at Cincinnati College until retirement at The University of Virgina.  In 1839, McGuffey was appointed president of Ohio University in Athens (Ohio), yet here we must look back to the nation-forming books he composed, The McGuffey Readers. 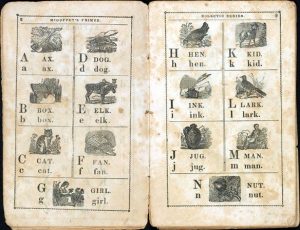 McGuffey’s Eclectic Primer, 1836. The first entry of the first McGuffey Reader, alike the first character drawn by his mother in the soot of the log cabin’s fireplace.

From Primer through Sixth Reader, the McGuffey series guides students through levels of excellence, levels once synonymous with grade levels, 1 through 6, though now, as is well-known, the McGuffey 6th grade level is beyond the capacity of most public-school dropouts and 12th grade students of large cities.  From McGuffey’s word puzzles, through history and the Bible, honesty and God, mathematics and poetry, even to the rich complexities of Shakespeare, students were made capable to build excellence into the world, to win civilization defining wars, to create a culture the most wise and good in all of history, until decline in progressive, public education … as you know, 21st Century students are described as “post-literate”, efficient in machines, deficient in language, wisdom and virtue, students proudly “post-logical”, refined in emotional, visceral reactions, indoctrinated to pursue a non-linear, anti-historic life. 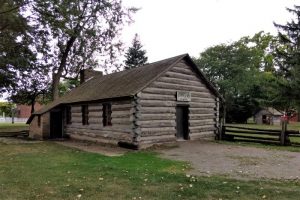 You will find at Greenfield Village (that repository of American architecture, invention and tradition) the log cabin into which William Holmes McGuffey was born, and there you will find a log schoolhouse typical of the McGuffey type.  This Greenfield Village McGuffey Schoolhouse was constructed in 1934 of barn logs from McGuffey’s boyhood farm.  This McGuffey School (located just a few miles from the school my brothers, sisters and I attended, Immaculate Heart of Mary) continued the virtuous manner of McGuffey education until 1969.

Today, after decades in recession, the McGuffey tradition in education grows in popularity among homeschoolers, cooperative schoolers, and one-room schoolers.  Each year hundreds of thousands of McGuffeys and McGuffey-styled readers are sold, read and enjoyed, employed to reintroduce traditional American virtue and to strengthen Classive Civilization. 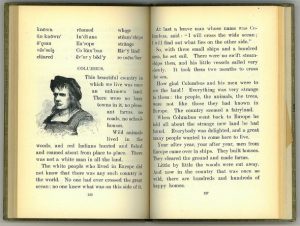 “Nothing so likely to make a man’s fortune as virtue.”

At McGuffey’s college, Miami University, is a building that resembles Philadelphia’s Independence Hall where our Declaration of Independence was ratified (July of 1776).  Here we are put in mind of the Philadelphian, Benjamin Franklin, ratifier, whose habit was quiet wisdom, respect to and for his fellows; we are put in mind of Franklin’s unfinished memoirs composed to guide his son; we recall Franklin’s “Poor Richard” whose wise, homey sayings inspired the epigraphic passages in McGuffey’s Readers.

The motto of Miami University, Prodesse Quam Conspici, translates, “To accomplish without being conspicuous”.  Perhaps you know that in the McGuffey tradition, older, more accomplished students humbly instructed younger, eager students to excellence and wisdom.  You will recall the 14-year-old McGuffey, who through teaching moral lessons in reading, writing, arithmetic led 48 of his fellow students to virtue, that unique quality most likely to make one’s fortune. 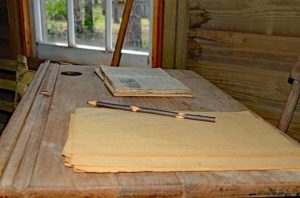 One-Room Schoolhouse with a McGuffey Reader. credit: Re Metau

Fortune has many varieties, “fame and riches”, of course, yet too there is one fortune without which all other fortunes are worthless, the fortune of familial happiness.  Consider the riches of a family close knit in the log cabin, of one’s individual worth to brothers, sisters, parents in fealty to log house chores, consider how each virtuous improvement enriches the entire family of the log home.  Corporations and governments have no interest in personal, familial virtue apart from financial profit to purchase products and pay taxes.  The family, though, the family is made fortunate by economies of house and home, by knowledge of all that is good, by wisdom in the world’s ways, by that love whose model is God.

Our houses are richer, larger, our computation tools are faster, our censorships are comprehensive, our distractions are infinite.  Yet, are we in steel-glass skyscrapers better people than we were when at home in log cabins … when student instructed student in virtue, when we learned truth, arithmetic, reading and writing from the moral lessons of McGuffey Readers, as young William learned of character and characters from his mother Anna Holmes McGuffey, one-by-one in the soot of a log cabin fireplace. 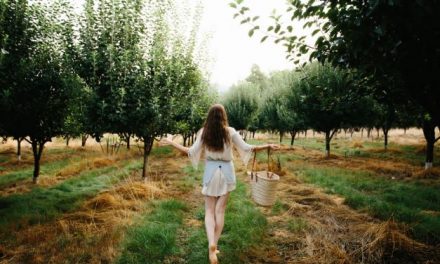 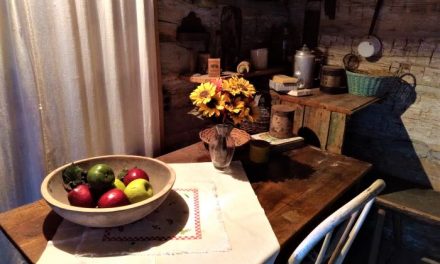 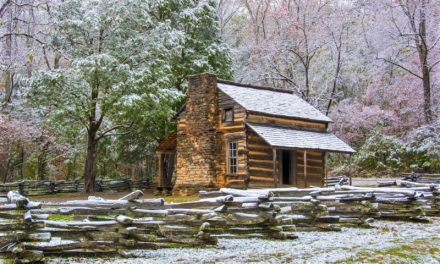 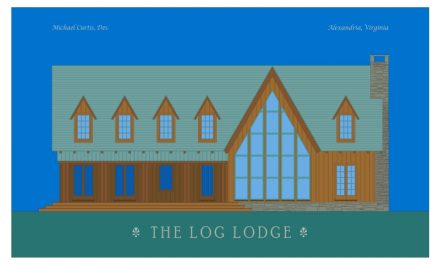