Monticello in Your Pocket 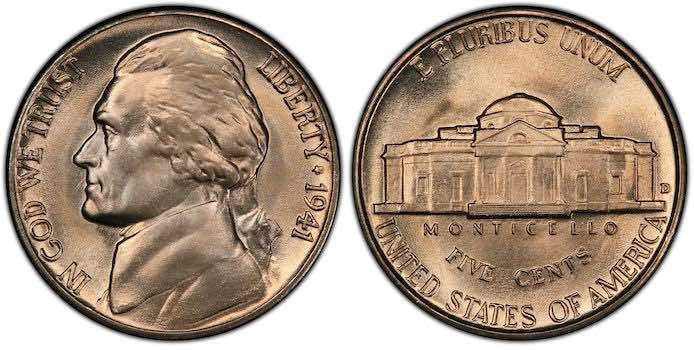 I suppose you recognize the face upon the American nickel, that five-cent-piece now as rare as the Five-and-Dime.  If you are older than, let us say, “the iPad”, you will remember Thomas Jefferson when he was not a painfully modeled flat-face upon a coin, head-cropped by coin’s edge, stiff, fussy, and cross-eyed; you will remember the Jefferson of F.O. Schlag, masterfully, broadly modeled, strong, secure, humane, as comfortable in the 20th Century as in the XVIII Century, and, we expect, as easy with Socrates as with Hamilton … well, probably more comfortable with Socrates than with Hamilton.  If you are as-old-as, well, me, you will remember the Indian headed, Buffalo Nickle, modeled by our Sculptor of Empire, James Earle Fraser, a fine piece featuring a powerful, stout buffalo [in truth, an American Bison], and a more powerful Indian Chief whose hard, archaic features seem by steel chisel to be carved into Time. 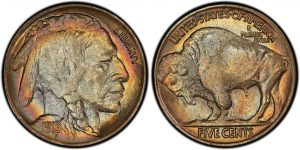 Both the Indian and the American President relief portraits are fine examples of numismatic art.  The current, three-quarters Jefferson, how best to say, “is as uncomfortable a portrait of Jefferson as that given by the self-flagellating, apologetic tour-guides of Monticello”.  And you will notice, when flipping the Jefferson and Indian nickels, a change of American symbol from animal to house, from bison to home, the home of Thomas Jefferson, Monticello, a masterpiece of American domestic architecture, among the great houses in world history.  There is much to say of Monticello, a bit here, below, and much, much more in the four, weekly segments The Beautiful American Home, Volume I, Issue 1.  Yet, before leaving the paragraph, should mention Monticello’s entrance room, “The Indian Hall” filled with wonders returned from Lewis & Clark’s Discovery Expedition: mastodon fossils, elk & moose antlers, other gifts from Indians and from European friends, and there for us a reminder of the Buffalo Nickel, that great, stripped bison hide hanging from the balcony, picturing the many weaponed battle of Mandan and Sioux. 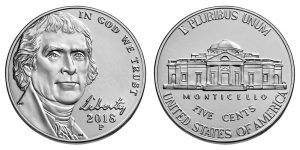 I expect that every American, and much of the world, knows Monticello, both for its rare fame and for its nickel commonality, friend of many pockets.  Notice, if you will, the bas-relief portraits of Monticello (Ital. “Little Mountain”) on the classic and on the current coin.  You will see a difference in modeling that tells of artistry, of conception, of who we once were, of who we now are.  The earlier, classic coin pictures the house as volume, full, heavy, expanding, a unity of parts.  The current coin pictures the house linear, thin, light, crookedly awkward, a division of parts.  The current coin might find parallel in the Kodak snapshot digitized by the cellular phone, every detail painfully drawn alike some banal, soulless, Wikipedia explanation.  The classic coin might find parallel in statuary of the Parthenon, every form filled with life, swelling, articulated as might a god describe his home, divine in harmony, dexterous in balance. 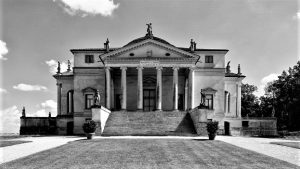 And what more do we notice.  Of both coins we notice Palladio, Jefferson’s guide, that Venetian architect who, more often than not, remind us that we are bilaterally symmetrical, at ease in a building which is at ease, which is easy with us, commodious to both the human body and to the humane, well-balanced mind.  We notice Roman precedent, the stately, Roman Doric Order, even when modeled no larger than a lady’s pinky nail.  We notice the home’s Classive equilibrium, an earth-rooted horizontal, and we notice the dome’s mounded vertical rising to heaven.  We notice hierarchy of parts, tripartite, alike reason, alike us: a bottom-middle-top, a side-middle-side, a beginning-middle-end.  We notice this Monticello is a temple, reasonably domed, scaled to purpose, fitted to life, a home for a creature alike ourselves, neither nest nor cave, burrow nor teepee; a place, alike a mind, that contains the best of what has been thought, done, said. 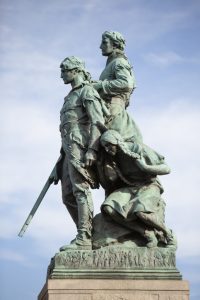 Just now it occurs to me, as I expect it occurs to you: the statue of Lewis, of Clark, of Sacagawea (see her, reading the trail) and the story of her guiding the Discovery Expedition (see note, below) is being censored, removed from the rich and varied history of Charlottesville, of Virginia, of America, and of Monticello.  It occurs to me that, likely you noticed the inscriptions upon the Jefferson nickels both classic and current:  on the current version, “Liberty” raised in Jefferson’s “Virginia Script” …  on both, “Monticello” and “In God We Trust” (expect most of we reading, do) … and, “E PLURIBUS UNUM”, out of many, one, inscribed in a variation of Trajan’s font.  The later inscription, “Out of Many, One” seems well suited to Charlottesville, to the nation, to you, to me, to family and to home.  Progressive intolerance does not well suit homes, republics, or even democracies.  I wonder: will the Indian Hall of Jefferson’s home, Monticello, be diminished when Lewis, when Clark, when Sacagawea are erased from memory.

Pardon that bit of moralizing, couldn’t be helped: as you might know, this author creates statues of presidents, justices, captains of industry, heroes, and other persons just like you, just like me … I take this removal of us, personally, seriously.  There is in my trade a saying concerning the use of bronze when melted from one thing into another, “From cannon to statue, then back to cannon.”  Seems we are at war when art is melted down, progressively to make weapons.

Scenes depicted in bas-relief upon the plinth of Charles Keck’s statue group, “Their First View of the Pacific”: West face, a “Buffalo Hunt”; North face, “Meeting of the Indian Council and the Explorers”; South face, “Indian Celebration [dance] Witnessed by the Explorers”; East face, “Homecoming of Sacagawea, and Indian Amazement at York [with an African-American among the Explorers]”.