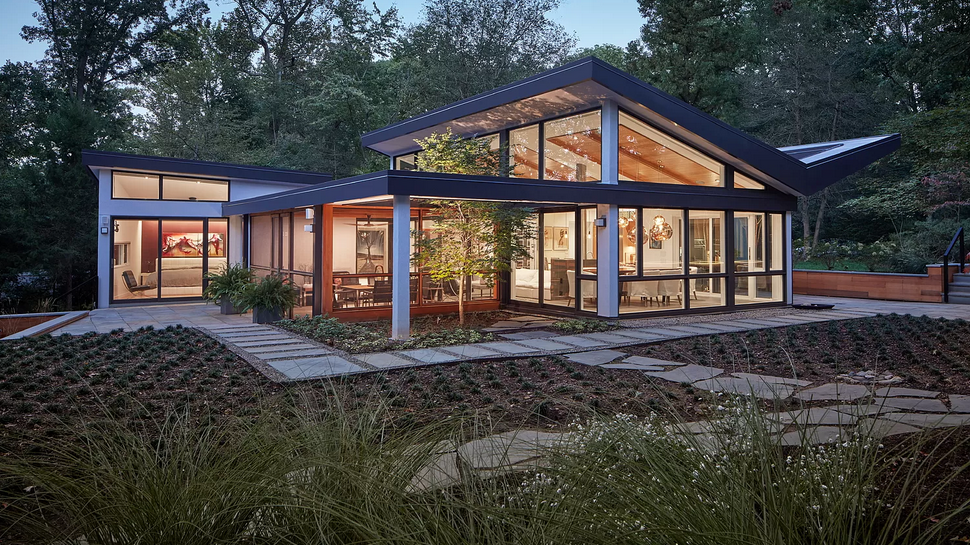 Tauxemont: Not Quite Mid-Century Modern Beginnings

About halfway between the city of Alexandria and George Washington’s Mount Vernon estate is a small neighborhood, which was designated a Registered Historic District on the National Register of Historic Places in February 2006 and the Virginia Landmarks Register in December 2005.  Named Tauxemont after a seventeenth-century Native American village, the neighborhood was joining a unique cohort that included the Fairfax County neighborhoods of Clifton, Herndon, and Langley Fork, as well as the Alexandria neighborhoods of Del Ray, Rosemont, and Parkfairfax.  Authorities at the county, state, and national levels carefully considered Tauxemont’s history as a planned community, as well as its architecture and naturalistic landscaping, in making the designation of Tauxemont a “not-quite” mid-century Modern neighborhood. 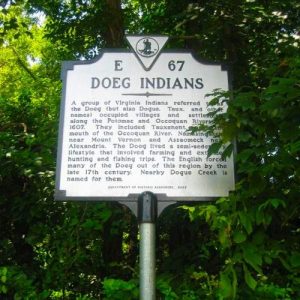 The founding of Tauxemont is related to a number of significant events in American history, particularly the New Deal, World War II, and the early days of the Cold War and Civil Rights Movement.  Franklin Delano Roosevelt (1882-1945), served as president from 1933 to 1945 and initiated the New Deal policies, which helped pull the country out of the Great Depression (1929-1939).  These new programs dramatically increased the size of the federal government and brought thousands of idealistic young professionals from throughout the country to the Washington, D.C., area.

Not enough housing was available in the metropolitan area to cope with the needs of the newcomers.  In 1940, a group of these New Deal federal employees, many of whom worked for the United States Department of Agriculture, were living in the Buckingham Apartments on Glebe Road in Arlington, Virginia.  Needing more space as their families grew, they banded together in an attempt to solve their housing problem.  The community they would found became one of the first suburban developments in Northern Virginia.

Through cooperative purchasing of supplies and self-contracting, the group sought to build relatively inexpensive houses for less money.  In doing so, they utilized many ideas current at that period regarding the landscaping and construction of neighborhoods for small houses, which were being encouraged by the Federal Housing Authority.  The basis of the FHA’s new ideas was a standardized single-story house, which could be easily enlarged as the family–and its income—grew and could be differentiated from its neighbors through the use of different exterior finishes.  According to the government, further variety could be added to the basic little houses, “by varying the elements of exterior design in ways that avoided repetition and gave the neighborhood an interesting and pleasing character, for example, by varying the placement of each house on its lot and introducing a variety of wall materials and roof types.” [1]

The Buckingham group officially incorporated on January 6, 1941.  Two months later, in March of 1941, they purchased 12.36 acres of farmland, which made up the first section of the current Tauxemont neighborhood.  Acting as president of the new corporation, Tauxemont Cooperative Houses, Inc., was Robert Carroll Davenport (1906-2002), who later achieved international fame as the developer of the neighboring community of Hollin Hills.[2] 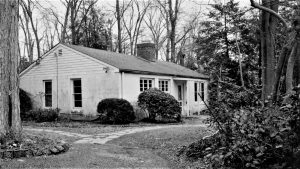 Construction on the initial phase of the Tauxemont community took place through the spring and summer of 1941.  Another member of the corporation/cooperative, architect Alexander “Sandy” Knowlton, designed the houses in Tauxemont, and acted as agent—hiring and supervising construction crews, purchasing materials, and siting the houses on the building lots.  By late fall of 1941, the young families began moving into their new houses, having achieved their goal of constructing affordable homes for about 70% of market rate.  Total cost per house in the first section in Tauxemont was $5,500.

Shortly after construction was completed on the first section of Tauxemont in 1941, the owners realized that they would have to take responsibility for services not provided by Fairfax County or any other entity at that time.  “After a period of informal cooperation,” they tried to officially organize as a cooperative according to Virginia law.  Although that request was turned down by the State Corporation Commission, the community was able to establish itself as a corporation on a non-profit, cost-sharing basis, incorporated as the Tauxemont Community Association, for the purpose of providing those services.  Residents took an active part in a number of efforts for the benefit of the group as a whole:  killing mosquitos; fighting Japanese beetles; paving roads; keeping a victory garden in the Second World War; and carpooling into the city to work.  That spirit of cooperative self-help and innovation has continued through the years. 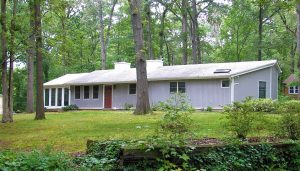 The basic Tauxemont house is a cinder block one-story with a side-gable roof (1). This update is sided.

Two additional sections were added to the community in 1942 and the late 1940s, respectively.  When Section III was constructed after the war, ten of the houses were built of aluminum produced by factories changing from wartime production of aircraft to peacetime uses.  Use of this surplus material soon had to be abandoned for the remainder of the section, however, after General Homes, the Ohio company supplying the materials, went broke.  The cost of the later houses increased substantially from those of the first section.  The lot alone cost one couple $1,800 in 1947 and the finished price of the house was an additional $13,500.

Additions to the basic houses were begun very early, with many, including a greenhouse and “a carport which will be the first garage in Tauxemont,” appearing in the late 1940s.  Progress was often slow, however, because the craftsmen doing the work were very busy and customers had to be put on waiting lists.  Some residents were even doing the work themselves.  By October 1948, two of the houses in the final section, Tauxemont III, had been expanded.  Prior to his work in Hollin Hills, architect Charles Goodman (1906-1992) was responsible for designing a number of the early Tauxemont additions.  These contemporary designs with their slate floors, hardwood ceilings, and recessed lighting are an important part of Tauxemont’s architectural development.  Goodman began a tradition of designing additions for the original Tauxemont houses in ways that made them unique unto themselves, and yet also uniquely “Tauxemont.” 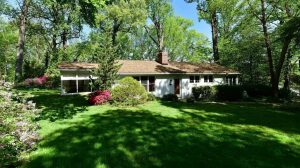 For the benefit of the neighborhood’s children, a backyard/basement preschool was established in 1942; the Tauxemont Cooporative Preschool is still in operation, it is the oldest cooperative preschool in Fairfax County.  Like its predecessor, the present preschool/community center building was constructed using labor from the Tauxemont neighborhood.  A controversial decision, which marked Tauxemont as different from other local communities at the time, was the hiring of an African-American woman as one of the early teachers.  Still later, the community was integrated in the spring of 1965, prior to the passing of fair housing legislation, without incident.

Tauxemont’s water system has been operated by neighborhood volunteers since the 1940s.  Two traditions begun by the early residents—a spring garden walk and a series of “Dutch suppers” [potlucks]—continue to help build and maintain community spirit.  The Dutch suppers may have originated with residents who transplanted the practice from another new Deal agency, the Tennessee Valley Authority.  An even more informal, much-loved event is Christmas Eve caroling, followed by a gathering for cookies and wassail since the late 1950s. 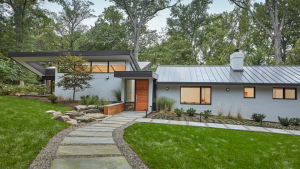 A McModern retaining something of Tauxemont’s original character; alternative view of the “featured image” (top).

Tauxemont is a great place to live.  It is located within walking distance from a small shopping center, which currently boasts a drugstore, grocery, bank, three restaurants, a hardware store, hair salon, barber shop, gas station, pastry shop, and several other retail establishments.  The closest subway/Metro terminal is only a short bus ride away, while an excellent hospital is reachable by car in just five minutes.  The Potomac River and a popular walking/bicycle path are also nearby.  While many families have and do find this a great neighborhood for raising children, there are also residents who find the one-story houses particularly practical for “aging in place,” while still being able to garden or just enjoy the lovely wooded landscape.

[1] The single-story design of the original Tauxemont houses has proven quite practical as residents have aged, allowing a number of older neighbors to stay in their homes until well into their eighties and nineties.  A good example of a more upscale version of what was considered appropriate for middle-class households at this period would be Frank Lloyd Wright’s “Usonian” houses, like the nearby Pope-Leighey House at Woodlawn Plantation.

[2] Hollin Hills, developed between 1949 and 1971, became well known for the efforts made to maximize tree preservation during construction and to “configure the houses to fit the contours of the land,” as well as for its “looping streets,” features which were used by Mr. Davenport a few years earlier in Tauxemont.  A newspaper article, which mentioned the new development, noted the similarity between the houses in the two neighborhoods:  “…the Hollin Hills homes will be of two types.  Both are designed by Charles Goodman.  One is suited for an inclined site and uses several floor levels….The other type…is built on one level and is an improved version of the old or basic Tauxemont house.” 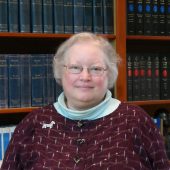 Mary Thompson has a B.A. in History (with a minor in Folklore) from Samford University, and an M.A. in History from the University of Virginia.  Ms. Thompson assisted at two United States Army museums and was as a field researcher of traditional folk crafts.  Since 1980, Mary has filled a number of roles at Mount Vernon: Historic Interpreter; Curatorial Assistant; Curatorial Registrar; Research Specialist; and Research Historian.  She is now responsible for research in all departments at Mount Vernon, focusing on everyday life on the Mount Vernon Estate, where she lectures on diverse topics. Mary’s curated exhibitions include, Treasures from Mount Vernon: George Washington Revealed, which opened in 1998 and travelled to five cities.  She has contributed to book chapters, encyclopedia entries, numerous articles, and she was a major contributor to The Mount Vernon Ladies’ Association: 150 Years of Restoring George Washington’s Home, and to, Dining with the Washingtons: Historic Recipes, Entertaining, and Hospitality from Mount Vernon.  Mary’s books include, “In the Hands of a Good Providence”: Religion in the Life of George Washington (received both the 2009 Alexandria History Award and the 2013 George Washington Memorial Award.  Recently, for Applewood Books’ young adult market, Mary wrote, A Short Biography of Martha Washington.  Her latest book, “The Only Unavoidable Subject of Regret”: George Washington, Slavery, and the Enslaved Community at Mount Vernon, was published by the University of Virginia Press, 2019. 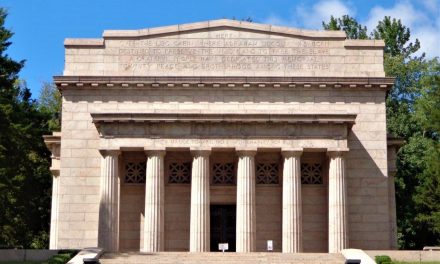 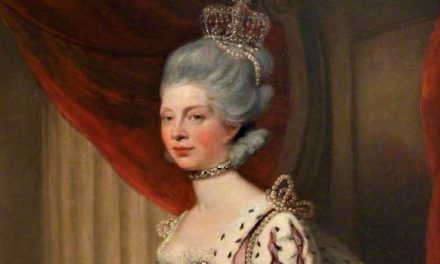 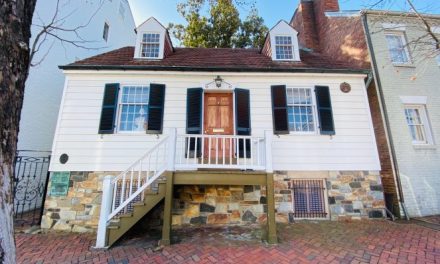 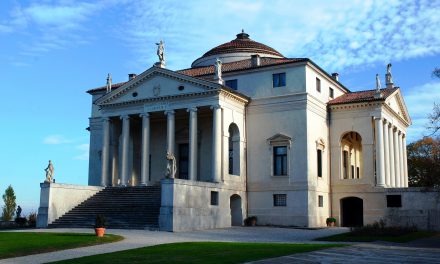