A sculptor, painter, historian, architectural designer, and poet, Michael Curtis has taught and lectured at universities, colleges, and museums, including The Institute of Classical Architecture, The Center for Creative Studies, and The National Gallery of Art;

his pictures and statues are housed in over 400 private and public collections, including The Library of Congress, The National Portrait Gallery, and The Supreme Court;

he has made statues of presidents, generals, Supreme Court Justices, captains of industry and national heroes, including Davey Crockett, General Eisenhower, and Justice Thurgood Marshall;

his relief and medals are especially fine, they include, among others, presidents Truman and Reagan, Justice John Marshall, George Washington, and, his History of Texas, containing over one-hundred figures, is the largest American relief sculpture of the 20th Century;

his monuments and memorials, buildings and houses, including The New American Home, 2011, are found coast-to-coast;

his plays, essays, verse and translations have been published in over 30 journals (Trinacria, Society of Classical Poets, Expansive Poetry, et cetera), and his most recent nonfiction books are, Occasional Poetry: How to Write Poems for Any Occasion (available through The Studio Press), and The Classical Architecture and Monuments of Washington, D.C. (available through The History Press); 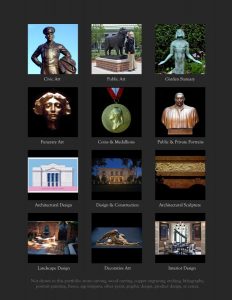 The Beautiful Home Team Members and Consulting Partners include: