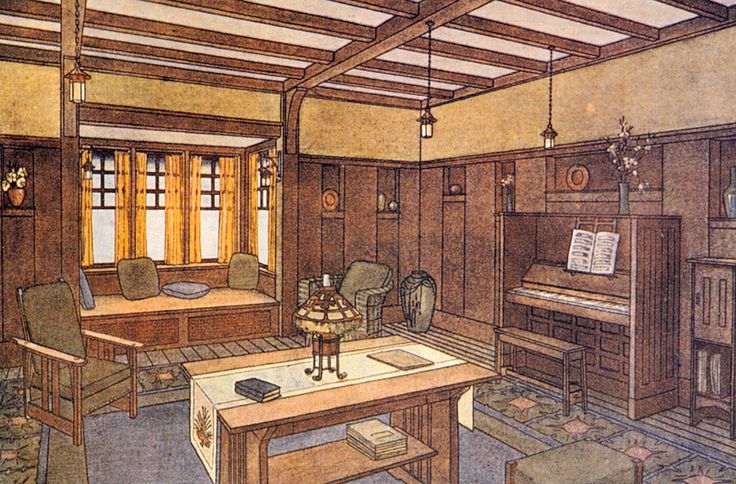 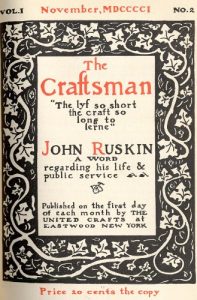 The Craftsman, Volume I, Number 2.

In the early days of American Empire (1898, The Spanish-American War, when our American Eagle’s wingtips stretched from Puerto Rico to the Philippines), a reforming aesthetic arose in contradiction to High Art, the moral Arts & Crafts and the Craftsman ideal.  Homemade, independent, grown from American tradition, Craftsman houses, furniture and decoration appealed to fellowship, to the self-made who distrusted Progressive government and international expansionism.

Foremost among our craftsmen, Gustav Stickley, a counterpart to England’s William Morris, a woodcarver, designer, manufacturer and publisher, a spokesman for simplicity, fitness, endurance, and harmony with Nature.  Stickley was in tune with American history and the pioneering spirit.  His magazine, The Craftsman (1901-1916), was invested in traditional conventions and customs.  The Craftsman’s first issue featured an Arts & Crafts house that learned from the sincerity of California Missions, from the harmony of parts and beauty of functional detail. 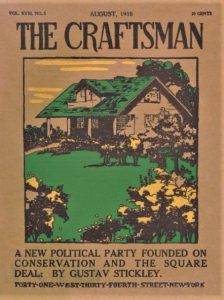 Over the years, The Craftsman houses were informed by openness (avoidance of unnecessary walls and halls), by sound craftsmanship (resistance to wear), by economy of resources, by warmth of materials, by charm in detail, and by those homey touches, the inglenook, the coppice, the handcrafted bowl, lamp, glass.  Month after month, The Craftsman offered advice on living in Nature, on integration of garden with house, on health in the pacing of the day.  Porches, pergolas, terraces and open-air dining rooms were sympathetically treated, sparsely decorated, and the whole house was physically illustrated with Nature’s bounty, the tree, the flower, the bush, the vine.

Rather than thwarted, Nature was obeyed in every detail.  Machines were hidden, people were humanized, and Craftsman gardens were contoured to the swells and rests of a gentle landscape.  Machined angles and machined forms were unwelcomed.  Curves, twists, surprises encouraged homeowners to follow Nature into health, into growth, into a full and meaningful life.  As the craftsman tells, “For peace of mind, peace of soul, the garden should be a place to wander, to rest, a place of trimmed walks, barbered shrubs, faultless flowerbeds, nature beautiful in the intimate.” 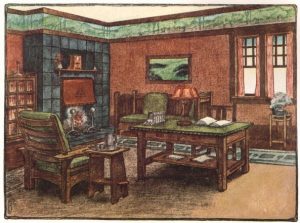 Alike a garden’s trailing vine, the chair, the table, the lamp were artfully placed without pretense, each object arranged in harmony with Nature’s way.  Most often the furniture fit the house, if the Mission style, something characteristically Spanish, a blossoming exuberance; if the log cabin style, something of the pioneer, handwrought and naive; if the Arts & Crafts style, something of the Swiss-German, of the Amish craftsman, a board-hard rocker, satisfying to people formed of stern stuff.

The Swiss-German style, closely associated with Stickley and the Arts & Crafts, was developed by A.J. Forbes for a Swedenborgian church in San Francisco (Swedenborg was a Swiss transcendentalist who inspired Johnny Appleseed and influenced Emerson and Thoreau).  Exacting, the Germanic Arts & Crafts is different from the guileless Mission … though the Arts & Crafts has something of the Mission’s utility, and both share a fealty to material emphasized in structure of the board, its grain, and the adornments in joining (pegs, dovetails, et cetera), those little flourish of hinges, alike leafy tendrils or boney sockets. 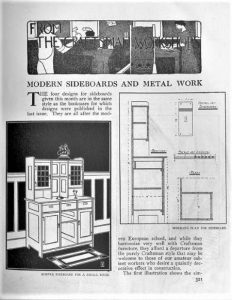 Leopold Stickley (Gustav’s younger brother) was the better marketer, the more shrewd businessman.  His nostalgic furniture extended Dutch and British Colonial styles, it emphasized American expansion through the Cherry Valley, a colonial pathway to the West.  Leopold’s furniture too was simple, honest, American, though he did not eschew the machine.  Proudly he advertised a process that was modern and scientific, and when the reforming Gustav declared bankruptcy (caused by labor-intensive production), Leopold purchased his brother’s company, exploiting the Craftsman image in ways that Gustav could not, or would not understand. 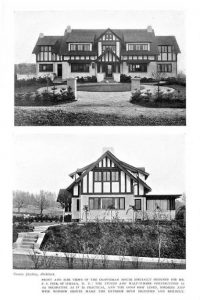 From my grandparents a Craftsman rocker has passed into the family inheritance.  You know the style, strict, sturdy and strong, and you might know the Stickley motto, a motto stamped upon Stickley furniture, “Als ik kan,” which from the Flemish translates “to the best of my ability.”  Als ik kan, the intention of all solid craftsmen.

When attending graduate school in The History of Art at The University of Michigan, I poured myself into The Craftsman magazines, antidote to the university’s airy, Progressive inanities, and continued in the hard-knuckled Arts & Crafts tradition of my undergraduate training (The Detroit Society of Arts & Crafts, though I left that school when it became The Center for Creative Studies … you will notice that neither “art” nor “craft” were in the school’s new name, instead, smoke and verbs and talking rather than making).

My first company, “Arborware” (of Ann Arbor, Michigan) manufactured decorative products and art, some of which can yet be found, products not unlike Pewabic pottery and other hand-fashioned objects.  That company, much alike Stickley’s Arts & Crafts, was a response to an aesthetic “reign of terror” (Stickley’s phrase).  To Stickley, the terror was a machined Christian Gothic; to Arborware, the terror was a computerized Progressive, soulless, sleek and cold. 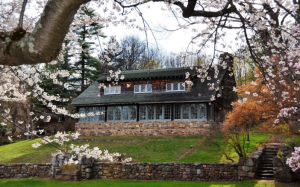 Stickley concluded his book, Craftsman Homes: Architecture and Furniture of the American Arts & Crafts Movement (1909), with hope that his magazine would have an

influence in bringing about the development of our national life along the lines laid down by the men who founded our Republic, [that] it will have fulfilled its mission, because a truth which one man finds courage to utter today is echoed and applied by thousands tomorrow.

* John Ruskin, St. Mark’s Rest: The History of Venice Written for the Help of the Few Travellers Who Still Care for Her Monuments, 1877. 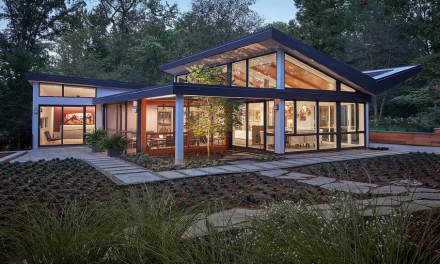 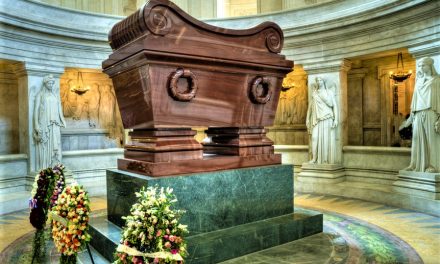 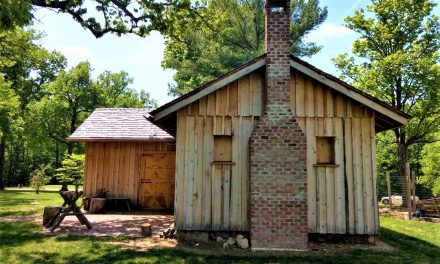 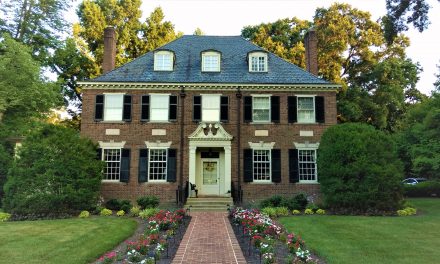