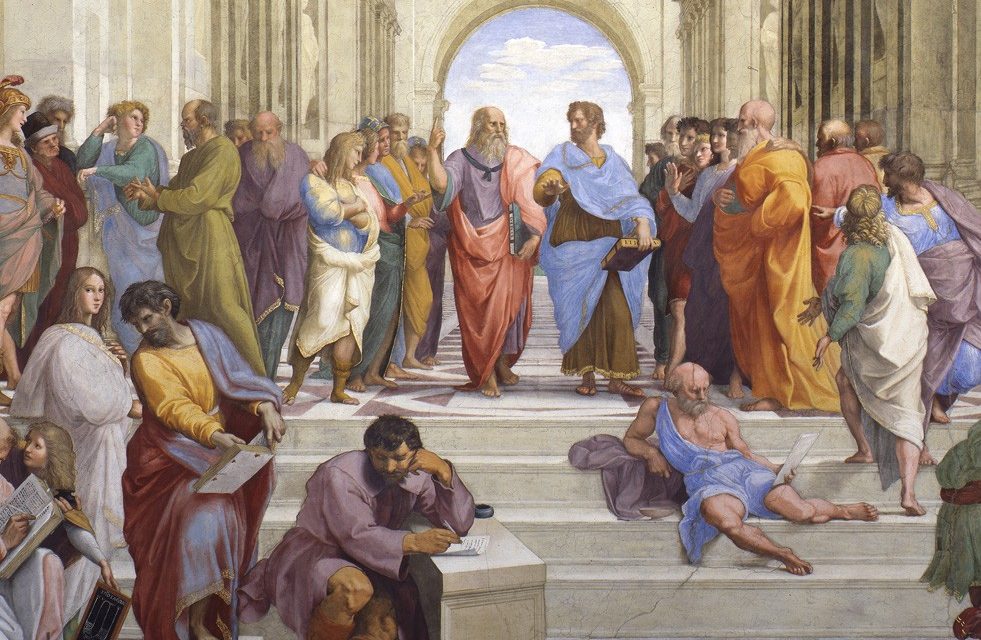 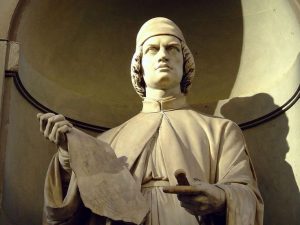 Of the top 3 Renaissance men, You will remember Alberti, our first “Renaissance Man”, perhaps for his portrait of the “Flying Eye”, perhaps for the luscious geometry of Santa Maria Novella (though I prefer the Tempio Malatestiano’s pastiche), perhaps for de Pictura (On Painting) and its codification of mechanical perspective, perhaps for his modernizing Vitruvius in De re aedificatoria (On the Art of Building) which contains much good-sense and practical-advice, perhaps because from standing feet-tied-together-flat Alberti could leap over a man’s head, and all the rest of him: there are many causes to admire Leon Battista Alberti.

Many people forget Alberti’s other accomplishments, his original thought expressed in plays, fables, poems, his suggested reforms in education, domestic management, aesthetic criticism.  People forget most things.  We are not encyclopedias.  Well, most of us are not. 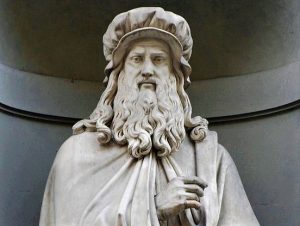 Certain, you recall the meaning of monticello, “little mountain”; certain too that you can imagine the implication of Jefferson’s Roman-temple home, Olympus-like hill-topped, surmounting tangled Indian land, following in view the sun’s westward, long rising and fading course.

And here, a little thing worthy of consideration: the vast eternity of evening’s unnumbered stars.  Imagine, if you will, Monticello’s star-expansive nights before our shrinking-technologies, the eerie-glow of screen-light, of electric-lights that depopulate the night’s sky, that narrow the infinite view of a Jeffersonian, broad consciousness, acknowledgement of his, of my, of your universal insignificance. 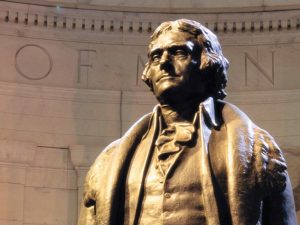 Perhaps you will have noticed Jefferson’s humility, have noticed the boisterous impudence of celebrities, the vainglory of progressives, the swagger of gender-study undergrads.  One full night in cool pitch slowly turning in large arch through the galaxy beneath huge suns that seem little light spots in eternity would achieve much in restoring humility, in growing the appreciation of genius.

Upon the recto of the Flying-Eye plaquette, Alberti poses the question, “Quid tum?” (what then).  A good question, one often found on the back of things, on the back of lovers, on the final page of books, on inscriptions of tombstones, in commencement address last lines, at the passing of an Age.  What then?  What now, we wonder.  I wonder, what of Renaissance men.

There is at the base of Charlottesville’s little mountain a silly statue where buses collect curious amblers for a wheeling to the heights of Jefferson’s intelligence, Jefferson’s ambition, Monticello.  The silly statue, a Jefferson mannequin, really, waits in bus-fumes to have its nose rubbed, to be the dull prop for dippy selfies, to be a warning for gentlemen to not achieve genius –

– truly, which genius, that you know of, aspires to stand mute in bus fumes, prop for idiocies, a thing best suited to nose rubs.  Yes: aspiring genius, be warned.  Are you listening, Alberti, Leonardo.  Be quiet.  And the rest of you: If you would be great, hide. 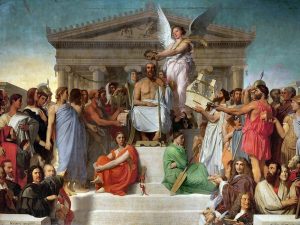 “The Apotheosis of Homer” by Jean Auguste Dominique Ingres.

Renaissance Men.  Well, there they are.  Here we are.  My goodness, what a lot of noise we make, little of which is abiding.  Perhaps you will recall the inspiration of our fading, Humanistic Age, the certainty that “A man can do all things if he but wills them.”1

Recall now, while yet you may, before the next, and perhaps final round of “you must not do that”, “you must do this”, “I will report you” progressively stifles the liberties necessary to genius … necessary to you in whatever measure you would achieve an independent, unique intelligence, suitable to your soul, serviceable to your fellows.

Here, below, a consideration of accomplishments that constitute the definition, “Renaissance Man”.2   You might find this list to be an antidote to silly statues, Wikipedia assertions, committee conclusions, and, perhaps, you might find this ranking-list to be your inspiration, your invitation to genius:

…and, there you have it: the top 3 Renaissance Men … just that easy.*

Leonardo’s Salvator Mundi sold for US$450.3 million (2017), a record for most expensive painting sold at auction.

When in Virginia’s House of Burgesses, Jefferson responded to the British closing Boston Harbor after the Tea Party by drafting in sympathy a Resolution of Fasting and Prayer – sorry to report that few noticed Jefferson skipping a lunch (1774); two years later (1776) the world would remember Jefferson’s inditement of King George III, The Declaration of Independence [shots fired at Lexington Green (1775)].

Leonardo was an illegitimate child without certain, formal education; yet, Bill Gates purchased one of Leonardo’s personal study books (“Notebooks”) for US$30.8 million (1994).

Leonardo, striking and handsome, marvelously endowed by heaven with beauty and with a seldom-equaled grace (as reported by Vasari) could bend the ring of an iron door knocker as if made of lead; he would challenge local toughs to throwing huge stones (of course he won), and would with ease lift great weights … when others groaned and pulled on heavy stones, Leonardo is known to have lifted the weight, placed it upon a tabletop with barely a draw of breath … and that, friends, sprezzatura.

Alberti invented what has come to be titled the “Alberti Cipher” (1467), that spinning wheel of letters known by Bond villains, Russian spies, and Cracker Jax aficionados.

Should mention a fact little known: Thomas Jefferson was a skilled poet.

1 English translation of a statement by Leon Batista Alberti.
2 This reckoning does not include Bernini, Michelangelo, Raphael; if it had, in the order just stated, each would have followed Leonardo.
3 Almost arbitrary in grading, this one category, rather insignificant in detail, would have altered the reckoning, elevated Jefferson to be ranked the most renaissance of Renaissance Men.
4 Renaissance: French; from Middle French, “rebirth”; from Old French, renaistre “to be born again”; from Latin, renasci, from re- + nasci “to be born”; the original, XVIII Century meaning, “rebirth of ancient ‘Classical’ civilization”; for us, XXI Century, the universal, well-rounded man [“Man”, of course, “Homo sapiens”, any extinct or living hominoid].

* “Why” you might wonder, “does the author leave Goethe off the list of top 3 Renaissance Men.”  Simply: I dislike him, perhaps for his inducements to suicide, his vanities, his dilettantish air-balloons, perhaps for his danged storms of emotion, that bawling over clouds, rippling water, and sunsets.  Whatever the cause, Goethe is not on the list. 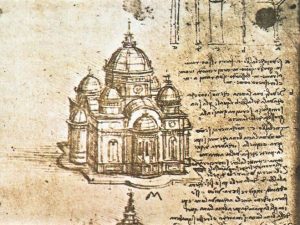 Leonardo, studies of a building. 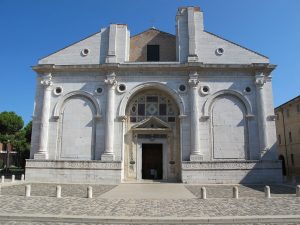 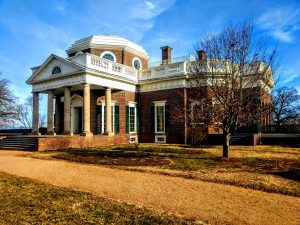 Featured Image: The School of Athens, by Raphael Sanzio. 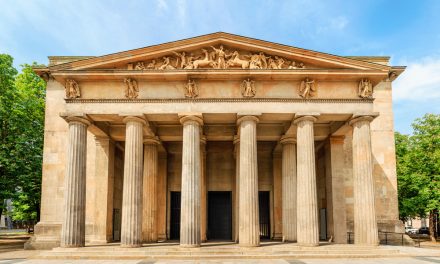