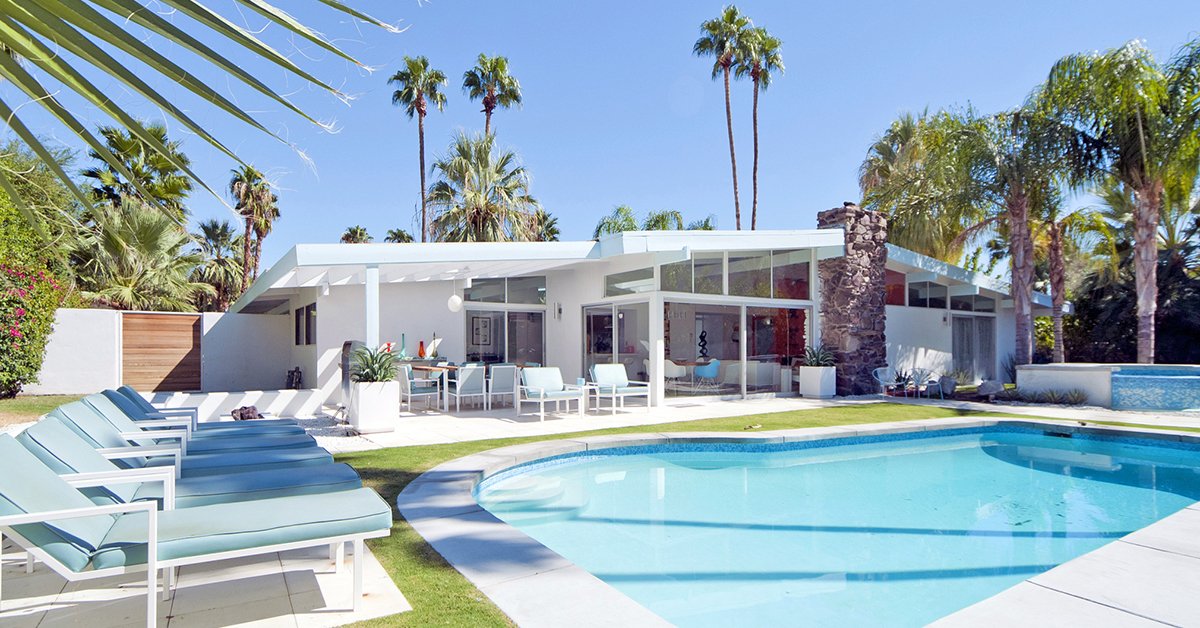 Mid-Century Modern is rather more a fashion than a unique architectural style.  If a style, the Mid-Century Modern is something of a colonial style, a style introduced by European modernists who fled Europe during the Great Wars, and who brought with them notions of civil disgust, of human failure, a belief that by progress in Science, machines and mechanized architecture might succeed in perfecting society, a society destroyed by the wants and wars of passionate man.

You will know Modernism by the imported isms; for instance, Cubism in pictuary, though in architecture the isms brought to our nation were Expressionism, Constructivism, the Bauhaus, Functionalism, Minimalism, Internationalism, Brutalism.  True, some of these isms, these styles, were jointly developed and strengthened by Americans.  And yet, you will notice a difference between the Jeffersonian, the Greek Revival, the Beaux Arts, et cetera, and the Expressionist, Constructivist, Brutalist, et cetera: the later are Progressive, the former are Classive.

The Classive and the Progressive are different things, as can be seen in all that is Classive, in all that is Progressive.  The Progressive developed from the ancient Greek notion that all that is, is made of atoms, a pattern patterning, “material” and nothing more.  The Classive too is Greek, is the tradition of “spirit” in material, of “soul in body”.  You will notice the difference between an architectural style that houses merely a body, and a style that houses a soul within a body.  As all know, the wants, needs, desires of souls differ from the wants, needs, desires of bodies.  This philosophical difference causes Progressive and Classive styles to embody opposite physical and visual characteristics. 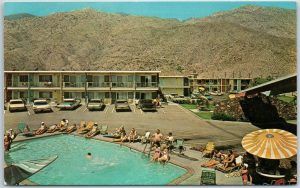 Recent studies of 20th Century European modernists suggest with almost certainty the effect of the Great Wars and PTSD on architects and modernist architecture, a blindness to harmony and balance, a variation in brain activity alike the autistic spectrum.*  American Progressives were much enthused by the immigration of European Progressives, and gave considerable editorial, political, and official support to the modernists, although the modernists were little liked and less trusted by traditional, majority America.  Even so, the modernist styles were mostly compatible with technological innovations, with commercial gadgetry, with amusing novelty.

The population boom, coda to the Wars, allowed speculation, stylistic risk, opportunity for the eager, the ambitious, the committed.  Most of the modernist styles were rejected by families, though bribe-like, government welcomed modernism, taxing into existence flat-glass buildings on many streets and plazas.  Where flat-glass and tradition met, the hybrid traditional-mod styles flourished, especially near government centers and hipster enclaves.  Then too, that sympathy with nature, that theology born of Swedenborg, celebrated by Johnny Appleseed and Emerson, the Romantic ideal of our Great Awakenings caused a sympathy to place, a species of honor to environment, an almost doctrinal honor that has continued till this moment. 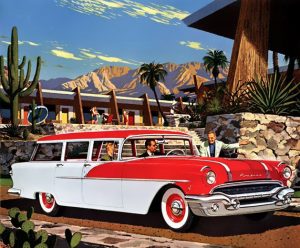 As mentioned, the Mid-Century Modern (MCM) is more a fashion than a single style, alike the Classive “Federal”, or the Progressive “Brutal”, so the MCM exhibits qualities beyond style, qualities that might partake of this Progressive, or that Classive, and assemble the whole in some nonce form, alike Palm Springs Modern, or Capital Modern, the former of the desert, the later of the woods.  There is, of course, the MCM of Florida, with its machinist, Deco qualities; the MCM of the Mid-West, with its prairie, Wrightian qualities; the MCM of the East Coast megalopolis with its urban, corporate qualities.  Each MCM Americanized the imported, European styles, making each style attractive, friendly to families, serviceable to automotive transportation and gadget innovation.

The two Mid-Century Modern considered in this month’s Beautiful Home, the Palm Springs and the Capital, illustrate the friendly confidence typical of American domestic architecture, and each exhibits a unique range, a particular use, an adaption of imported, colonial styles.

In 1925, historical fantasy anticipated a future utopia in the “Exposition Internationale des Arts Decoratifs et Industriels Modernes”, and Europe zoomed into the unknown and unexpected.  By 1932, Alfred Barr, director of the Museum of Modern Art, presented the exhibition, “Modern Architecture: International Exhibition”.  That exhibition gave the “movement” its name, gave the Progressive a standard.  Historical styles were rejected, ornament was eschewed, the machine was privileged, structure was emphasized.  Idiosyncratic geometries and quirky mathematics predicted a “scientific solution” indifferent to inherited traditions. 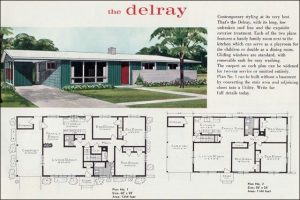 The “ranch”, inspired by the Rancho, and the accordion cabins of the plains, was sentimental, dear to American identity, adaptable to increasingly mobile, middle-class life.  The MCM style grew from the Depression through the Wars, here-and-there learning by use, by experience.  The old ranch was made young again with easy indoor-outdoor living, sliding glass-doors, patios and grills, open kitchens, freedom of movement over threshold, rather than up steps.  In 1946, Sunset magazine advertised Western Ranch Houses, “The ability to move in and out of your house freely … makes living in it pleasant and informal.”

From the 1929 Crash until Victory Day, August 9, 1945, house building was retarded.  Veterans returned, hope restored, a boom, industry fueled: fabricated metal houses, standardized materials en masse, walls on the cheap put-up fast in little settlements, great developments, each politician, each developer, each builder eager for a faster trick, a quicker profit.  Excitement in the new and improved.  Even so, tradition valued sound construction, even in the small house, colonial, ranch, or the Movie Star, Mid-Century Modern. 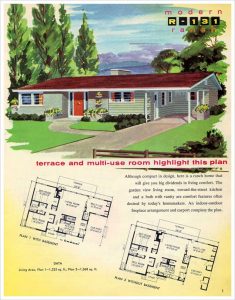 For convenience, most MCM houses were “stock” house-plans, though many were individually architect designed, designs that were soon translated into “new” stock plans, and the mostly prefabricated one-story mods predominated on magazine covers, in awards, and in the ambitions of young homebuyers.  The Colonial styles did not lose in popularity, though they were minimalized, stripped into “neos” (Neo Neo-Tudor, et cetera); there were the futuristic experiments here-and-there celebrated, though seldom purchased; yet, if contemporary, alike music and television, mod was the choice, no fuss, no detail, little formality.

Of the mod, the ranch whose windows stretched in long horizontality, whose roofs flattened, whose textures crowded in a confusion of purpose unmediated by necessity; the split-level that extended in ranch, that rose in two-storied tradition, a building form alike a mullet, long on one side, tall on the other; the “A” frame, high and bricked in the North, low pitched and glass walled in the South; in the desert, a flat roof cantilevered over Mondrian-like walls, in the woods a shed roof with little overhang that showed high, northern windows; most everywhere, shed or flat or “A” or ranch, sympathy, synthesis with nature, in the way a building might slight a man to glorify a tree.

Those (above) the Mid-Century Modern variations.  These, following, a few architects whose names are commonly remembered, who we shall dilate upon in these pages, Wexler, Goodman, Wright, Neutra, Cody, Frey, Eichler, Dow, May, and those who are by insistence remembered, Gropius, Mies van der Rohe, Breur, Corbusier. 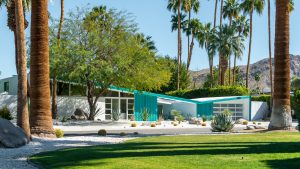 Proportions
Typically one story when in the desert, split or two level in the suburbs.  Mostly asymmetrical, rectangular and horizontal.

Roof Features
A flat or low-pitched roof, often with a cantilevered overhang.

Structure and Materials
Of block in the desert and city, of wood in the suburb.  Construction is often modular, especially in “metal” houses.  Glass walls in post and beam construction.  Materials are often contrasted, as in the juxtaposition of bond and board directions.  Substantial chimneys of stone or brick; if not a chimney, a commanding wall.  The whole usually at rest upon a concrete pad.

Space and Floor Plan
An “open plan”; the kitchen, dining, and living rooms often a continuous space; bedroom groups separated from the living rooms.  Carports are typical, though garages are common.  Basements and attics are rare, except in the ranch variations.

Entrance
Often formal in front, and glass paneled; a private entrance to utility rooms from the carport or garage; sheet or sliding-glass doors opening to pool or landscape.

Color
In the desert, predominately white, punctuated with bold, primary colors; in the woods, earthy browns and greens; in the West and Mid-West, natural tones; in the East Coast, machine colors are common.

Surroundings
In sympathy with nature, often intimately integrated with the landscape. 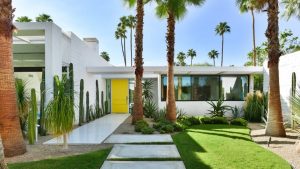 Almost everything that distinguishes the modern world from earlier centuries is attributable to science, which achieved its most spectacular triumphs in the seventeenth century.
Bertrand Russell

Make it new is the message not just of modern art but of modern consumerism, of which modern art is largely a mirror image.
Christopher Lasch

In the middle ages, people took potions for their ailments. In the 19th century they took snake oil. Citizens of today’s shiny, technological age are too modern for that. They take antioxidants and extract of cactus instead.
Charles Krauthammer

The longer I live, the more beautiful life becomes. If you foolishly ignore beauty, you will soon find yourself without it. Your life will be impoverished. But if you invest in beauty, it will remain with you all the days of your life.
Frank Lloyd Wright

A doctor can bury his mistakes but an architect can only advise his clients to plant vines.
Frank Lloyd Wright

The details are not the details, they make the design.
Charles Eames

A house is a machine for living in.
Le Corbusier

The mind is like an umbrella – it functions best when open.
Walter Gropius 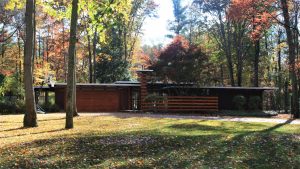 The 1939 New York World’s Fair, “The World of Tomorrow” with its Norman Bel Geddes (General Motors) “Futurama” exhibit, a scale model of an American city with skyscrapers, superhighways, and landing pads. 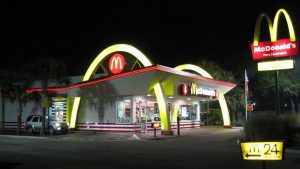 Palm Springs Modern and Capital Modern house-plans
will be found in this month’s Beautiful Home, 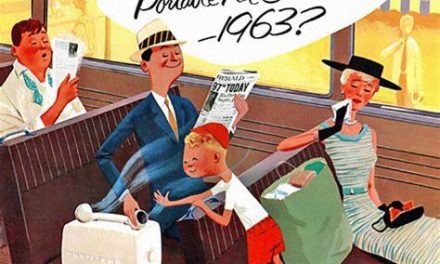